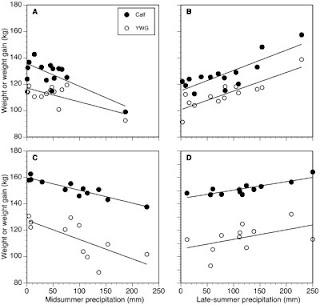 Relationships between mid- (a, c) and late-summer (b, d) precipitation and bison weights for each year for Konza Prairie (a, b) and Tallgrass Prairie Preserve (c, d). Calf weights and yearling weight gain (YWG) were adjusted for differences in sex ratios to represent the average weight of an average male and average female bison. Midsummer weights were standardized for variation in late-summer precipitation and vice versa.
In RSWP, I write a lot about nutrient limitation of plants. One thing that comes out strongly as we look at how ecosystems function is that nutrient limitation in plants can induce nutrient limitation in herbivores. Especially for nitrogen which animals generally cannot access through other means except by eating plants.

We just had a paper published that illustrates a few important points regarding nutrient limitation in grazers and the distal controls on grazer performance. In the paper, we examined how interannual variation in the timing and magnitude of precipitation affected the weight gain of free-roaming bison. Every year, the bison herds are rounded up, and each individual weighed. Bison weights of calves and animals in their second growing season (yearlings) were analyzed for 14 years for Konza Prairie, Kansas, and 12 years for Tallgrass Prairie Preserve, Oklahoma. The sites are both native grasslands on the drier edge of what is considered humid grasslands. The records of weight gain for wild herbivores are among the longest known—only Marco Festa-Bianchet’s excellent work on mountain goats is comparable.

As we looked at how much weight the animals gained each year, we found was that more rain late in the summer increased the weight gain of the bison. Not much of a surprise there. More rain in August, which is often dry, means more green grass later for the animals, which would allow them to grow more. What was unexpected (to some) was that having more precipitation early in the middle of the growing season (late June, early July) caused animals to gain less weight. Why? Here, it’s not the quantity of food, but its quality. What we found was that having high precipitation in the middle of the growing season also increased flowering (see previous post on flowering). More flowering means more low-quality stems, which lowers the average protein concentrations of the grass, and lowers weight gain. This idea wasn’t entirely unknown—some ranchers say a dry June is money in the bank—but it was the first time quantified scientifically.

Now, it also might be the quality of the leaves that is low in high mid-summer precipitation years (we don’t have data on that), but the data illustrate a few key points. First, in grasslands, quality is as important to consider as quantity when considering grazer performance. As I describe in RSWP, there are glaring examples of this being glossed over (as well as great examples of its consideration). Second, as we think about how grasslands are structured and how they might change, the timing of precipitation can be as important as the amount. Increase or decrease the amount of precipitation by half and bison gain the same weight. Shift it from August to early July and weight plummets.

What we learn from simple observations continues to amaze me. By no means have we plumbed the depths of understanding the complexity of grasslands. Complements to both Konza’s Gene Towne and The Nature Conservancy’s Bob Hamilton for doing such a great job for more than a decade.