The importance of surveys: a case study with plant 15N 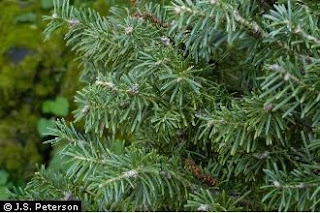 Needles of Abies lasiocarpa, a specimen of which was found to have the lowest recorded foliar del15N of wild plants on the planet. (Image from USDA)
Both experimental and natural gradients are important ecological tools for understanding . The pendulum of relative importance has always been in motion on these and it is probably safe to say that there is more funding for experiments than surveying gradients. There are certainly some questions that can only be answered with experiments (e.g. effects of elevated CO2 on plants), while gradients are uniquely poised to shed light on other questions, such as long-term soil development.
Just like experiments are sophisticated tools, so are surveys. Do them well, and understanding can come quickly. Do them poorly, and knowledge generation can stall. Case in point, I've been working for some time on understanding global patterns of plant natural abundance nitrogen isotopes. As I've mentioned before, these isotopes have the potential to provide powerful insight into the workings of the N cycle. When ecologists first began to examine patterns of plant 15N in the early 1980's, there weren't obvious differences among types of plants as there were with 13C and C3 and C4 plants, for example. The one thing that stood out was that N2-fixing plants (e.g. legumes) often had signatures that were similar to the atmosphere (del15N of 0). With this observation, the next 15 years or so was dominated by trying to interpret plant 15N signatures with respect to fixation, with little success. Missing during this time were all the environmental correlates and other species differences that might shed light on dominant processes constraining plant 15N.
Fast forward to the present, and the battle is still being waged to narrow ecological interpretations of plant 15N. We're still working on getting published a synthesis of 10,000 foliar 15N samples. One thing that is interesting about the data are the extremes. The lowest recorded foliar del 15N is -14.4 from an Abies lasiocarpa at Lyman Glacier in Washington state (Hobbie et al. 2005) . The highest recorded 15N is 17.2 from a Cassia in Thailand (Yoneyama et al. 1990). If we take these two endpoints of ecological gradients, the basic patterns of controls on plant 15N are clear. The Abies is ectomycorrhizal, has foliar N concentration of 12 mg g-1 and is from a cold ecosystem. The Cassia is from an arbuscular plant (in Fabaceae, but found to be non-fixing based on infection) with a foliar N concentration of 33 mg g-1 and from a hot ecosystem. These contrasts (mycorrhizal type, mean annual temperature, and foliar N concentrations) encapsulate the majority of contrasts we see in our larger dataset.
I feel like with the foliar 15N data, we weren't patient enough in seeking out extremes. And it's set us back 20 years in understanding the N cycle. Before we got locked into fixation, there should have been a number of surveys of plant 15N. Sample a number of taxa across the globe until the extremes and patterns become available. The 10,000 data points that we have only represent about $100,000 worth of analyses.
When we become interested in a pattern or process, good surveys are critical. Do them wrong, and the development of knowledge becomes stunted. And not just for isotopes. There are a number of other ecological patterns and processes that could benefit from better surveys such as soil microbial communities, root anatomy, plant phenology. If we think of these surveys as antiquated natural history, they are unlikely to be done well in a timely manner. But, if we think of them as sampling a diversity of natural experiments, maybe they'll be seen as worth the investment.
Posted by JMC at 8:44 PM