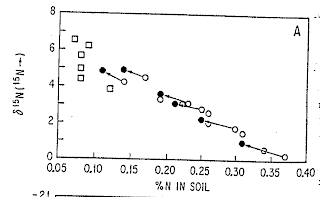 If there is a state-change in how we think about global N cycling, or at least interpret soil 15N, it's likely to come by looking at covariates. For example, it's been hypothesized that hot sites have higher 15N because they have lower soil P, or higher soil pH, than cold sites, which is more directly driving large-scale patterns.

Or it's something else we haven't considered yet.

Working through the older literature on soil 15N, one paper that stands out is Knute Nadelhoffer and Bryan Fry's 1988 paper. There, they sampled a long-term experiment that varied litter inputs to soils at the University of Madison Arboretum. They took the soils and incubated them for 600 d, periodically leaching the soils.

I regraphed their data using %C instead of %N and you see something similar. Over time, C is being respired, C concentrations drop, and 15N of the SOM goes up. 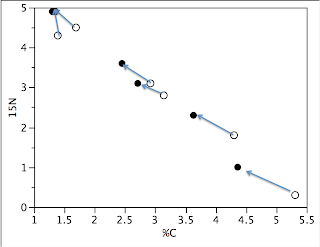 About 80% of the N that was lost was from inorganic N in leachate. The other 20% was presumably from gaseous N loss.

The general idea that microbial processing of organic matter enriching 15N of the remaining material and causing C and N concentrations to decline has been shown repeatedly. Litter bag studies (Connin et al. 2001) show the same pattern. So do studies of different fractions of soil organic matter that differ in their degree of microbial processing (Kramer et al 2003): 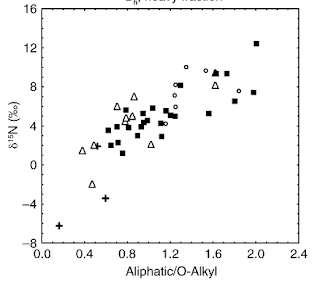 The microbial processing concept has been applied to understanding vertical patterns in soil 15N, but never geographic patterns.

It's possible that hot, dry sites are not (potentially) enriched in 15N because they lose a greater fraction of N to gaseous N loss, but instead because their soil organic matter is more decomposed.

To test for this, the key would be to look at soil C or N concentrations. C:N is generally considered an index of decomposition, but Nadelhoffer and Fry showed that as decomposition proceeded, both C and N declined. C concentration (or maybe N concentration) might be a better (not perfect) index of microbial processing.

If the processing hypothesis predominates, then hot, dry sites would have lower %C and higher 15N. After accounting for variations in %C, if mean annual temperature or precipitation no longer predict soil 15N, this might be a good indication that they impact the degree of organic matter processing more than the relative importance of fractionating losses.

Once you get to the point of competing hypotheses, the only thing left to do is test them.