N cycling 1999: tropics and temperate on its head 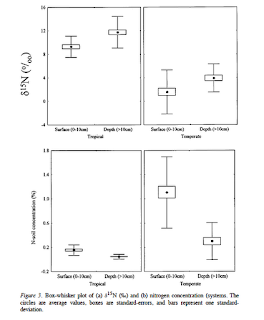 In 1999, two papers were published that began to frame global patterns of soil 15N. One was Handley's. Although they highlighted precipitation, their major significant pattern was latitude.

Martinelli et al also published a paper on global patterns of soil 15N in 1999. Like Handley, they, too, highlighted the importance of latitude. But for one detail, they were exactly the same. The best descriptor for the two results?

The authors initial statements were rooted in the idea that tropical forests are less N limited than temperate forests:

--"A number of lines of evidence suggest that N in most tropical forests is relatively more available than is N in most temperate forests. "

--"On average, more N circulates annually through lowland tropical forests, and does so at higher concentrations, than through temperate forests."

--"Emissions of N-containing trace gases are also higher, both absolutely and as a fraction of
N circulating through forests"

--"Comparable data on rates of N mineralization and leaching losses are sparser, but they generally show greater rates of N cycling and loss in many lowland tropical forests."

--"Overall, these observations suggest that N functions as an excess nutrient in most tropical forests, but not in the majority of temperate forests."

There were exceptions to these patterns such as tropical white-sand soils and montane forests and temperate forests dominated by N2-fixing trees or with high anthropogenic N deposition. But the initial premise was that N was more limiting in temperate than tropical soils, causing less N to be lost through fractionating pathways.

Like Handley, Martinelli et al.'s explanations were based on work that Vitousek had been associated with. And again, the authors talk about the "openness" of the N cycle, with open N cycles losing more N through gaseous pathways.

But why the difference?

One point is that Martinelli's tropical systems were primarily from Brazil. Handley's were from  Australia and Africa.

Could the nitrogen cycle just work differently in tropical South America than the other two continents?

Which was the right pattern? Remembering Shearer's earlier work from the US that showed an average soil 15N of +9‰, did the tropics actually have higher soil 15N than temperate ecosystems? Or were they the same?

And why did the different patterns exist?

A paper a few years later would seem to provide the definitive summary of soil 15N patterns, though the why question would linger.