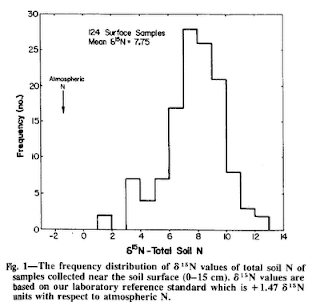 In the progression of our understanding of global patterns of N cycling, 1999 was a big year. Two papers were published that year that began to shape our interpretations about how geographic variations in climate impacted N cycling. They did so by examining broad patterns of nitrogen isotopes in soils and leaves.

Prior to 1999, Georgia Shearer and Danny Kohl had laid out the broadest patterns of nitrogen isotopes in soils, or lack thereof. Georgia had passed away recently, and her story is worth reading. Even though she never had received a PhD, was one of the world's experts in understanding nitrogen isotopes. Danny recently explained to me:


"As I recall, we undertook this study in part in response to a paper from Bremner's lab. They reported that half of the soils they measured had a Delta 15N value below zero and half above. We had reason to be skeptical of the accuracy of the reported data, so we undertook this much larger study...However, we had a hard time thinking of a mechanism that would result in negative values of 15N in soil N) since loss mechanism tend to favor the lighter isotope, resulting in the remaining N having a delta 15N value greater than zero."

The paper that they were looking at was published in Science in 1964. When they looked at the theory, they knew that N comes in to ecosystems with a signature of 0‰ relative to the atmosphere. All the processes known leave behind N enriched in 15N, not depleted. So how could any soils be depleted?


In response, they had collected over 100 soils from 20 US states and looked at the relationships between soil 15N and climate, depth, soil pH, and land use.

Soil depth patterns "were not consistent".
Differences among "cropland, pasture,  uncultivated land, and forest...were not striking".
N fertilization had "no systemic effect".

The take-home-message was that there was little pattern to soil 15N, at least in the US.

Curiously, their summary stated "less than half of the variation among soils in del15N of the total N could be accounted for by differences in environmental variables or soil characteristics."

Sometimes, though, less than half is more than we had before.

What patterns did they see?

Their approach to determining the correlations was not multivariate, but their were hints that soil 15N could be used to understand broad scale patterns in N cycling.

Unfortunately, that paper led to a 20-year drought in advance. Researchers afterwards focussed on using plant 15N as an index of recently fixed N. And it took about 20 years to realize that it didn't work that well.

The shift in approach to understanding 15N came about 21 years after with the publication of work by Martinelli et al. and Handley et al. These two papers offered different views about the major  controls on N cycling that are still reverberating. More on this soon.