Understanding global N cycling patterns circa 1999: precipitation is (not) important 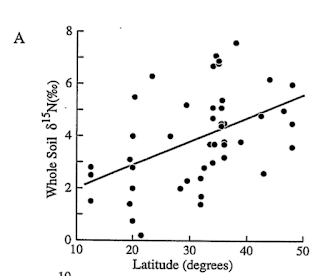 As soil 15N measurements accumulated, interpreting the characteristics of the N cycle that generated variation in del 15N at broad scales began to develop.

In 1999, two papers were published that began to interpret 15N signatures of soil in terms of N cycle dynamics.

The first was by Linda Handley and others, "The 15N natural abundance (d15N) of ecosystem samples reflects measures of water availability".

With a title like that, you'd think the main conclusion would be simple.

For soils at least, the authors showed strong relationships with latitude (shown above). Relationships with precipitation existed for foliar del15N, but not soils. Although their abstract reads "“The delta15N of whole soil ...when regressed on latitude and rainfall, provided the best model of these data, accounting for 49% of the variation in whole soil delta15N.” Yet, in the text they state that their model that predicted soil 15N with latitude and precipitation "was improved by deletion of rainfall as a model variable."

Precipitation was not a significant predictor of soil 15N, despite the title and the abstract.

Still, the authors showed that tropical soils were depleted in 15N relative to high-latitude soils.

The authors explained these patterns based on reasoning from Austin and Vitousek 1998: openness of the N cycle.

The more important inputs and outputs relative to internal cycling, the greater the del15N.

Whether precipitation was or wasn't important would have to wait to further syntheses.

The other paper published in 1999 also drew heavily from the work from Austin and Vitousek and also showed latitudinal gradients of 15N.

Yet, their interpretations were just the opposite.